So, my life story, yeah, I noticed that most people start the story of their life at the point that they finished college. To keep things clear: I can’t

In fact, I plan on going back to my 2nd year in college so graduating will have to wait for now. Since I still have to put something up here I will start from the moment that I (almost) finished high school. You know, since the years before that where spend learning to walk, shitting my 2 year old pants, playing outside and finishing middle school.

Since we’re talking about my baby years, here’s a photo of me with a baby.

So finishing high school is the point where we’re going to start then. Agree? Good.

After 5 years of high school, of which the last 2 of them where spend doing nothing mentionable in particular, I managed to finish high school. The fact that I was horrible at Math as well as French and got the minimal required score to pass is totally irrelevant.
Before we continue there’s something else worth mentioning (the fact that I write it down like that is going to come back to me.) : I got a girlfriend. Want to see the first picture of us where we ”found” eachother? No? Here it is!

The fact that I was almost fully intoxicated on this picture doesn’t make it any less romantic.

As we probably all know, when you finish high school in the beginning of June you have around 3 months of free time. These months where, again, spend doing nothing worth mentioning in particular. Except for 1 thing: I went to the gym for the first time.

Me officially finishing High School. Can you see those 2 weeks of gym work paying off already?

Now, I’ve always been moderatly active, I did Judo when I was around 8, also quitted at around 8 but doesn’t matter: I did Judo. Then it was on to Football which I played for around 5 years until I was 14, but then puberty hitted me hard and I grew 20cm in around 3 months. This immense growth resulted in me having no control over any part of my body (especially my limbs), which had the pleasant outcome of me quitting football because:

A) I couldn’t control my limbs, legs are limbs, football is played with legs.
B) The growth had resulted in me having pain in my feet and knees. Since football is done with feet and knees this turned out to be it for me.

At 14 I came up with the idea to play the wonderful sport of tennis. And I did, for 3 years. I trained once a week and you could clearly see that during competition matches. Once a week is not that many.

See that smiley face, right upper corner, black shirt, that’s me. First and only time that I actually won something with tennis.

When those 3 months of doing nothing during summertime had finally gone by (Ooh yeah, that gym thing, I had stopped doing that after 1 month) it was time for my new adventure: College.

Since I wanted to study ”International Leisure and Tourism Management.” that meant that I had to go to a university that was located 100 kilometres (60 miles for the people that don’t speak metric) away from my house. I had 2 options at that point:

A) Move out and live 10 minutes away from my lecture hall.
B) Travel to college for 2 hours in the morning with public transport and travel 2 hours to get back. Each day.

Logically, I chose B. ( did i say logically?)

The first half year of that was tough. travelling for 4 hours each day. New projects and assignments and my girlfriend (who I had now been dating for 3 months) had gotten Pfeiffer, which made her so energyless that she spend the next 4 months in bed and wasn’t fully cured until January. Needless to say, I spend my days travelling from college to my home back to my girlfriend and on to college again. It was tough.

However, there was one thing that wasn’t tough: College itself.

An all but exciting picture of the place where things weren’t all that tough. With a pigeon in front.

No, college was easy peasy. As I said earlier, I finished high school but only just. This however, wasn’t because I have trouble with learning. Fact is, I don’t have problems with learning at all but that’s exactly the problem: It makes me lazy. I knew that if I would put out the minimum amount of effort, I would get the minimal required score and pass the test. Then came December.

Luckily my girlfriend was recovering well, this combined with the fact that I still traveled 4 hours a day gave me time to think. I felt that something wasn’t right and that I wasn’t living up to my full potential. The more December progressed the more this feeling grew and eventually reached a point that I knew I had to change something.

But what? was the question. I didn’t know. I asked this question, again and again.
One morning, in the house of my girlfriend I watched out of the big, living room window and thought to myself: what do I need to do to be happy?

What followed can only be described as a mental rollercoaster in which I had only one goal and was going after it like my live depended on it. The plan was simple:
– Get my first year certificate, quit college.
– Train for an Ironman and finish an Ironman. hopefully find a goal and an answer to the question ”what do I want to do in my life?”
– Get back to my second year of college.

After bombarding my girlfriend and family with this new idea. I can all but say that following my heart was the greatest decision of my life.
After all the long training, the preparation and sacrificies, the 6th of July 2014 finally came along and after 13 hours, 55 minutes and 46 second of digging deeper then I had ever digged before: I finished Ironman Frankfurt 2014 as the youngest contestant that has ever participated Ironman Frankfurt.
Then I cried: 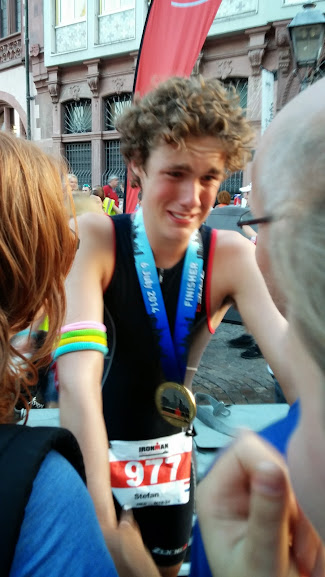 Does this really need a caption?

In March 2014 I decided to set up this blog. That was a result of me being frustrated with the way people treat their body (we stuff it with junkfood, magic pills and don’t excercise, like, really?).

Which brings us to the goal of this blog:

Supporting athletes in their quest to improve in the sport they have passion for.

How we do that?
By creating blog posts that can be valuable and helpful to the Athletic Athletes who are interested in them.

Hopefully we can support each other and make this a more concious and valuable world.

Doing it, one day at a time.